September is Sepsis Awareness Month and Jamaica Hospital wants to educate the community about this very serious condition. 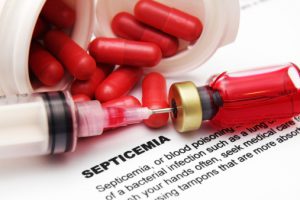 Sepsis is a potentially life-threatening complication that stems from an infection. Sepsis occurs when chemicals released into the bloodstream meant to fight an infection trigger inflammatory responses throughout the body. This inflammation can damage multiple organ systems, causing them to fail. If not identified and treated early, sepsis can progress to a condition known as septic shock, characterized by a dramatic drop in blood pressure, which may lead to death.

Sepsis is viewed by most doctors to be a three-stage syndrome, starting with sepsis, progressing through severe sepsis, and eventually into septic shock. The goal for healthcare providers is to look for the early symptoms of sepsis and administer antibiotics and IV fluids immediately before the condition becomes more dangerous.

Early symptoms include having a suspected or confirmed infection, plus a:

Sepsis can affect anyone, but it is most common in older adults or those with a weakened immune system. The number of cases of sepsis in the United States appears be increasing. Some of the factors attributed to this rise include:

• A growing population of people over 65 years old. This group tends to have a weaker immune system.
• An increase in the amount of antibiotic-resistant bacteria. When these drugs used to treat infections do not work, it can lead to sepsis.
• More Americans are living with weakened immune systems, caused by HIV, cancer treatments or transplant drugs.

Since hospitals and nursing homes typically treat people who are either older or who’s immunity levels are compromised, sepsis can often occur in these settings.

Understanding the need to address the situation, Jamaica Hospital has taken a very proactive approach to combating sepsis. The hospital has initiated comprehensive protocols to both identify and treat sepsis. These efforts have led to steadily improving outcomes for our patients.