Much has been written about the effects that smoking and secondhand smoke have on people’s health. Recently, attention has been given to another dangerous byproduct of smoking, it is called thirdhand smoke.  This is the phenomenon where nicotine and other chemicals found in cigarette smoke lingers in carpeting, clothing, furniture, bedding, wall, cars, and any place where people have smoked a cigarette. It doesn’t go away easily. Some suggest coming into contact with thirdhand smoke residue can lead to serious health issues, similar to those associated with second hand smoke .
The effects of thirdhand smoke can include difficulty with breathing, coughing, and potentially many of the other complications that can come from smoking a cigarette.Children are more susceptible than adults to thirdhand smoke because they come in to contact with more surfaces within a home during a typical day. They play on the floor, they run their hands across table tops, and they are more likely to touch surfaces that are hard to clean.
Thirdhand smoke is difficult to remove from an indoor area. Simple cleaning is often not effective. The best way to avoid thirdhand smoke is to maintain a smoke free environment. There are no benefits to smoking only bad effects and it is important for people who smoke to realize that they are not only harming themselves, but also those who they share space with.
If you would like to stop smoking, please contact one of the counselors at Jamaica Hospital at 718-206-8494 who will assist you. 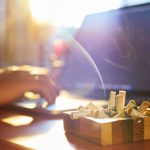