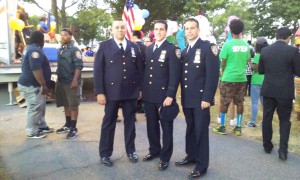 National Night Out is an annual summer event sponsored by the National Association of Town Watches in which prescient organize anti-crime rallies with the participation of local business and civic organizations. Various Police Department units present displays and other city, state and Federal agencies also take part. National Night Out (NNO) is held each year at Baisley Pond Park every first Tuesday in August.

The focus of the Trauma Division was to provide injury prevention education to the community. Literature was distributed on bicycle safety which includes the importance of wearing helmets when riding and pedestrian safety.

Individuals were also educated on signs and symptoms of Concussion. Fact sheets on Concussion from the Center of Disease Control (CDC) were distributed to the public.

National Night Out has proven to be an effective and enjoyable police, community partnership.