Today is the Great American Smokeout, an annual event when the American Cancer Society encourages everyone to quit smoking. This event helps to make people aware of the dangers of using tobacco products as well as the tools that are available to help them quit smoking. 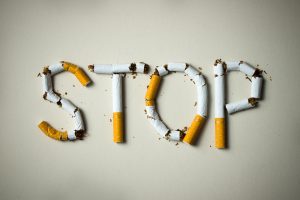 The Great American Smokeout started in 1970 in a small town in Massachusetts. People were asked to give up smoking for one day and to take the money that they would have spent on cigarettes and donate it to a local high school scholarship fund. The event spread to other cities both large and small and eventually led to legislation that bans smoking in workplaces, restaurants, and other public spaces both indoors and outdoors.

Smoking  is responsible for one in five deaths in the United States today. Lung cancer is the leading cause of death in both men and women. Smoking is also the cause of cancer of the larynx, mouth, sinuses, throat, esophagus, and the bladder. The number of people who smoke has dramatically decreased in the United States since the anti-smoking campaigns began. In 1965 it was estimated that over 40 percent of the population were smokers and today that number is around 18 percent.

Smokers have the best chances of quitting if they use at least two of the following methods: