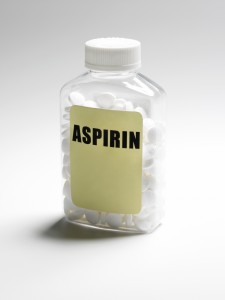 Aspirin, the generic term for acetylsalicyclic acid, has been widely used for over 100 years. It is derived from the compound called salicin which comes from the bark of the willow plant. Historically, the pain relieving effects of salicin have been known for thousands of years, having been described by Hippocrates in some of his writings.

In the early 1800’s, scientists in Europewere working with the extract derived from the willow tree to help provide pain relief. While the impure crystal form of this compound helped to relieve pain, it was so strong that it had very bad side effects on the stomach. Over time, scientists were able to obtain a purified version of this compound and combined it with sodium to neutralize this effect.

In 1899, a German chemist working for the Bayer company convinced his bosses to market this new wonder drug to the public, and it became one of the first all purpose pain relievers.. Initially, aspirin was sold as a powder and became available in 1915 in tablet form.

Aspirin’s effect as an anti-clotting medication, allows it to prevent strokes and heart attacks. While other medications such as ibuprofen have become available for pain relief in more recent years., aspirin is still used by many.