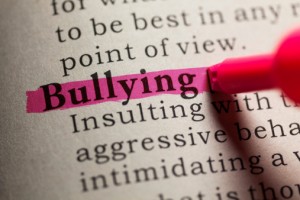 Bullying occurs when an individual or group possesses an imbalance of power, either from a physical or social status perspective, over another person or group. While bullying is prevalent among all age groups, it has become a serious cause for concern among children.

The National Bullying Prevention Center defines bullying as behavior that hurts or harms another person physically or emotionally. Those being bullied often have difficulty stopping the behavior directed at them and struggle to defend themselves.

Statistics have shown that at least 28 percent of students, ages 12-18, reported being bullied at school during the year. Additionally, 7.2 % of students admit to not going to school due to personal safety concerns. Many fear the physical and verbal aggression of their peers, and many more attend school in a state of anxiety and depression.

Many children will not tell parents they are being bullied until the situation escalates, but there a few changes in their behavior that can alert you.  Signs that your child may be a victim of bullying include refusing to speak about their day at school,not wanting to go to school, unexplained marks and bruises, asking for more lunch money, complaining of frequent headaches and stomach aches,sudden loss of friends and frequent nightmares.

“Bullying has profound effects on children. For some, it affects them for life. Psychological responses can range from depression, anxiety, post-traumatic stress disorder to severe reactive rage leading to the victim being the perpetrator of cruelty to others. In some instances, children have responded to bullying and cyber-bullying by committing suicide,” states Dr. Seeth Vivek, Chairman of Psychiatry at Jamaica Hospital.

If you find that your child is being bullied, you will need to document the dates, times and places of the action. If the bullying is taking place on school grounds, call the school and schedule a face to face meeting with a teacher or principal. If not on school grounds, notify the police.

Most schools have adopted an anti-bullying policy. Obtain a copy to determine if the bully violated school law. Bullying is best handled when you work together, with the proper authorities.

After notification, be sure to follow up with your child, and the school, to make sure that the bullying has stopped.