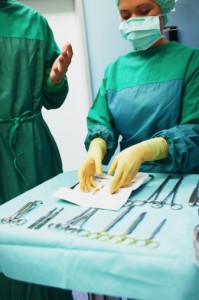 Instruments that come in contact with the body during all surgical procedures and many non-surgical procedures must be free of all microbial elements. This is to ensure that the risk of infection is kept to a minimum.
Throughout history different methods were adopted using materials that were available at that time. In 3000 BC the Egyptians used pitch and tar as antiseptics. In later years the fumes from burning sulfur were found to cleanse objects of infectious material.
In 1680 a French physicist, Denis Papin invented a pressure cooker that would trap boiling water, convert it into steam, and was found to cleanse objects by cooking them. This device was further improved upon during the next two hundred years and it became possible to additionally sterilize linens, dressings, gowns using steam. Two major contributions to the art of sterilization came in the 1860’s when the French chemist and microbiologist Louis Pasteur wrote extensively on how germs cause disease and the English physician, Joseph Lister, developed a technique that used carbolic acid as a spray to disinfect instruments. During the late 1800’s steam sterilization became much more widespread. Surgical instruments were also being made out of materials that were better able to withstand high levels of heat. This allowed them to be processed at higher temperatures and  were being made with smooth surfaces which allowed for more thorough cleaning.
During the 1900’s various improvements were introduced. This included sterilization with steam,  irradiation, with glutaraldehyde. More recently, sterilization of instruments can be achieved using high temperature / high pressure, ultraviolet light, and the  most commonly used chemical for sterilization is ethylene oxide.  It can be used on almost all instruments, both metal and non-metal.
The importance of cleanliness when it involves objects that come in contact with the body cannot be stressed enough. It was recognized in ancient times and improvements are still evolving today for the safety of patients.