Hundreds of years ago scientists realized  they could measure changes in temperature by using primitive glass devices filled with liquids that expanded when they were warm and contracted when they cooled. Alcohol and mercury were the liquids most commonly used.
Thermoscopes were the earliest types of thermometers and they only showed changes in temperature but didn’t show numerical values. One of the first thermoscopes was developed by Italian inventor, Galeleo Galilei in 1593.It used water as the liquid and glass bulbs inside an open tube. The glass bulbs rose and fell with the changes in temperature. In 1612, another Italian inventor, Santorio Santorio, used a numerical scale on the thermoscope but it was very rudimentary.  In 1654 the first sealed glass tube was developed by Ferdinand II, the Grand Duke of Tuscany. It contained alcohol and had a numerical scale, but wasn’t very accurate.
The more modern thermometer was invented in 1709 by Daniel Fahrenheit. It was an enclosed glass tube that had a numerical scale, called the Fahrenheit scale. The early version of this thermometer contained alcohol and in 1714 Fahrenheit developed a mercury thermometer using the same scale. He assigned the freezing point of water at 32 degrees, the boiling point of water as 212 degrees and the normal body temperature as 98.6 degrees. Later on in that same century, the inventor Anders Celsius developed a numerical scale, called the Celsius or Centigrade scale. This scale was based on a scale of zero to one hundred where the freezing point of water is zero, the boiling point of water is 100 degrees and normal body temperature is 37 degrees. The first real medical thermometer was invented by Sir Thomas Allbut in 1867. It was six inches long and took about five minutes to take a person’s temperature.
For almost a hundred years thermometers were basically unchanged. They contained alcohol or mercury and were considered to be very accurate. More modern thermometers were developed after World War II that used infrared technology and placed in the ear. They utilized tiny electrical circuits and numerical readouts  that could measure temperature more quickly and with more precision than the liquid filled glass tubes. Today modern thermometers use some type of electrical sensors to measure temperature but the same numerical scales developed in the 1700’s by Fahrenheit and Celsius are still being used. 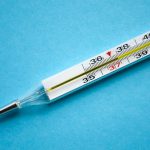