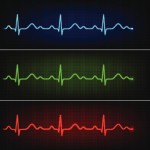 An EKG machine measures the electrical activity of the heart. It displays this activity by drawing waves on a piece of paper that is either displayed on a screen or drawn on a piece of paper that runs through a machine.
• Late 1700’s – The first step in the development of the modern electrocardiograph machine was the creation of a machine that could sense, but not measure, electric current. This machine was called a galvanometer.
• 1786 an Italian physician, Dr. Luigi Galvan, discovered that skeletal muscles worked by producing electric current. In
• 1842 Dr. Carlo Matteucci working at the University of Pisa discovered that there is an electrical current that comes with each heart beat in a frog.
• Mid 1800’s a machine called the “Rheotome” was invented that could now measure this electrical current.
• 1872 – further refinements to this Rheotome led to a machine devised by Gabrrile Lippman  of the “capillary electrometer”.
During this time, a British physiologist, Augustus Waller, was able to record the first human electrocardiogram that using this technology with electrodes placed on the chest and back of a patient. This demonstrated electric activity taking place before ventricular contraction. In
• 1893 – Dr. Wilhelm Einthoven, a Dutch physiologist,  refined the capillary electrometer to show five deflections in the electrical current passing through the heart. The five waves were initially called ABCDE, but were changed to PQRST after a mathematical correction was made to compensate for the inertia in the capillary tube. He used the phrase “electrocardiogram” for the first time at a meeting of Dutch physicians.  In
• 1901 – Dr. Eintoven he developed a string galvanometer, a more sensitive machine. He  was awarded the Nobel Prize in Medicine and Physiology for his invention of the electrocardiograph.
As time passed, the electrocardiograph machine became much smaller and much more accurate. In 1903 it weighed 600 pounds and by 1930 it weighed about 30 pounds. Tthe importance of an electrocardiograph was recognized as being essential in diagnosing cardiac from non cardiac pain and able to help diagnose a myocardial infarction or a heart attack. Today we use a 12 lead electrocardiogram as a major tool in diagnosing heart disease. The machine today weighs just a few pounds and is an essential tool in diagnosing diseases of the heart.