Lung cancer is a form of cancer that starts in the lungs. It is the leading cause of cancer death in the United States in both men and women. More people die each year from lung cancer than from colon, prostate ovarian, and breast cancer combined. 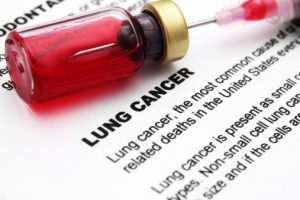 In the early stages there may not be any signs or symptoms. A history of smoking definitely contributes to a higher risk of being diagnosed with the disease, though non-smokers also can develop lung cancer. Smoking causes cancer by irritating the lining of the lungs. This causes changes in the lung tissue. It is believed that the effects of smoking may be reversible in the very early phases but repeated exposure to the chemicals found in smoke will eventually be irreversible.

Signs and Symptoms of Lung Cancer include:
• A cough that doesn’t get better
• Coughing up blood
• Shortness of breath
• Chest pain
• Wheezing
• Hoarseness
• Headache
• Weight loss that isn’t intentional

If lung cancer is suspected, a few tests to make the diagnosis definitive will be ordered. A chest x-ray will be performed and if there are any lesions found on the lung a CT scan will to get a better view of the lungs. An exam of the sputum can sometimes reveal lung cancer cells and to complete the diagnosis a lung biopsy will be done to examine the cells to see if they are cancerous.

Depending on the stage of the cancer, treatment options vary and can include chemotherapy, radiation and / or surgery. A common surgical option is called a lobectomy, removal one of the lobes of the lung.

There is no way to prevent lung cancer, but the best way to reduce your risk is to not smoke. If you do smoke, quit immediately. Also avoid second hand smoke, radon, and harmful carcinogens.