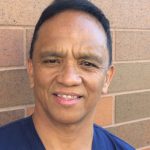 The entire staff of Jamaica Hospital Medical Center’s Emergency Department is critical to treating hundreds of patients every day. For over twenty years, one of the people who has dedicated his career to taking care of patients is Bobby Serina, RN.
Bobby grew up in the Philippines where he attended Liceo De Cagayan College of Nursing. He graduated in 1979 then started working at Doctor’s General Hospital in Cagayan de Oro City in 1980 as an ER/OR nurse. Bobby furthered his education during this time and obtained his BSN Supplemental in 1981. In 1985 he decided to go abroad, traveling to the Kingdom of Saudi Arabia where he worked at the 1400 bed Riyadh Central Hospital in the emergency room.
While Bobby was working in Saudi Arabia he met his beautiful wife Menchi who is also an ER nurse. They are blessed with three beautiful children and two grandchildren. He worked in Saudi Arabia for ten years and had the opportunity of a lifetime when he went to work in the Royal Palace clinic in Riyadh. In the years that Bobby spent in Saudi Arabia he learned the culture of the country and the Arabic language which he still speaks very well. In 1983 Bobby’s wife came to the United States and shortly afterwards, he followed.
Bobby has been working at Jamaica Hospital for twenty years and he describes his experiences at the hospital as amazing and would not trade it for anything.  He feels that he learns something new every day which he feels is so important. He enjoys working with the wonderful people at the hospital who come from so many different parts of the world. Bobby describes the ER as a collaborative effort between the EMS responders, PCA’s, PAR’s, transporters, PA’s, physicians and hospital administration. The camaraderie amongst the staff and the fact that they share a common goal of helping our patients is why they work together so well. Bobby really enjoys making a big difference in patients’ lives and he says, no matter how stressful each day can be, at the end of the day he says he feels a great deal of accomplishment.
Bobby is dedicated to his profession and to providing patients with the highest level of care and compassion. When he isn’t working, he enjoys running, working out, playing tennis and basketball. What is especially important to Bobby is his family and he enjoys spending time with them as often as possible.