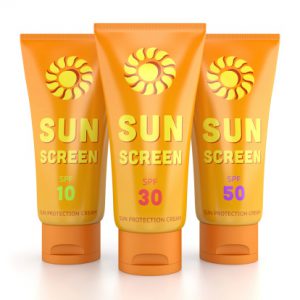 The use of sunscreen is highly promoted and protecting our skin from the harmful effects of the sun’s rays has become a major concern as we learn more about the damages it causes. Today we are able to choose from many brands that offer the level of protection we need- but did you know the concept of sunscreen is nothing new? In fact, sunscreen was used by ancient Egyptians.

The Egyptians were known to use rice bran extracts, jasmine and lupine extracts as a sunscreen because they realized these ingredients had the ability to absorb the sun’s very strong rays. These chemicals are still used today in some of the modern sunscreen products.

Modern sunscreen products really started to become popular in the 1930’s. A South Australian chemist, HA Milton Blake created a sunburn cream that had some limited success. This was followed by the introduction in 1936 by the L’Oreal Company of a sunscreen product that was very effective at providing protection from the sun’s rays. In 1938 a chemist by the name of Franz Greiter developed a cream called Glacier Cream that provided added protection. He is also credited for identifying the sun protection factor (SPF) that became a standard measurement of sunscreen effectiveness.
In 1944 an American pharmacist patented a sunscreen product that eventually would become Coppertone.

Later developments in this field produced products that would protect the skin from the UVA and UVB rays from the sun. Manufacturing sunscreen is a multi-billion dollar industry that continues to evolve. With more and more literature being published about the sun’s harmful effects on the skin, people will always be looking for better ways to stay protected as too much exposure can lead to skin cancer and other dermatologic conditions.