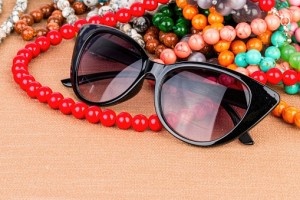 Sunglasses were used in the 12th century in China. These sunglasses were made out of flat panes of smoky quartz. Though they didn’t do anything to correct eyesight, they were used to protect the eyes from sun glare. In the 1400’s sunglasses were starting to be developed by the Italians who also sought to correct vision problems with them.
In the late 19th century and early 20th century,  sunglasses were prescribed for people who had syphilis as they were known to be sensitive to light and these glasses would be helpful.
Sunglasses became popular fashion accessories for Hollywood movie stars in the early 20th century and from that time the general public also started to wear them.
Mass production of sunglasses began in the late 1920’s when they were introduced by Sam Foster. He began by selling them on the boardwalk in Atlantic City.  In the 1930’s the inventor Edwin Land introduced polarized sunglasses based upon his patented Polaroid filter.  During World War II the  Ray Ban company developed eyewear that protected pilots from glare and soon these became popular with the general public as well.
There are many styles and manufacturers of sunglasses today and they still serve the same concept that was discovered in China almost one thousand years ago.