Dentistry is one of the world’s oldest medical professions. As early as 5000BC tooth decay was described as being caused by dental worms and this belief was not proven false until the 1700’s.
In 166 – 200 AD Italy the Etruscans began to work on dental repair with crowns made from gold as well as bridgework.  The Chinese began using silver paste to repair cavities in the 700’s. The first organized group of dentists were described in France in the 1200’s and were actually barbers who in addition to cutting hair, had been trained to work on teeth.
Beginning in the 1700’s developments in dentistry were coming along at a quicker pace. In 1723 Pierre Fauchard, considered to be the father of modern dentistry wrote  one of the first complete books on dental practice. In the early 1800’s porcelain teeth began to be commercially manufactured to serve as replacement teeth. In 1839 vulcanized rubber was first used as a base for false teeth. Ether was first used as an anesthetic in 1846.
During the late 1800’s dental tools were being improved upon. The first mechanical drill was commercially manufactured in 1871, the first hydraulic dental chair was manufactured in 1877 and in 1895 x-rays were coming into practice for dentistry.  In 1905 the local anesthetic novocain was developed.
Oral hygiene and prevention of tooth decay became popular in the 1900’s. Toothpaste in tubes became popular with the general public as opposed to powders and pastes that had been used previously. Cities across the country began to fluoridate the water supply to aid in the prevention of cavities, and the first nylon toothbrush was manufactured.  High speed air driven drills which were developed in the late 1950’s made visits to the dentist less painful.
Dentistry is constantly evolving with new techniques being developed to make dental care better for both the dentist and the patient. If you would like to schedule an appointment with a dentist at Jamaica Hospital, please call 718-206-6980. 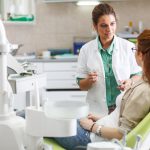